skip to main | skip to sidebar

Tails From The Waiting Room

I tried to voice my discontentment with a quiet whimpering, I tried that for about 5 minutes but was largely ignored. I then increased the volume of my whimpering and interspersed various loud directional barks at other dogs to try and get them to help me voice my discontent. 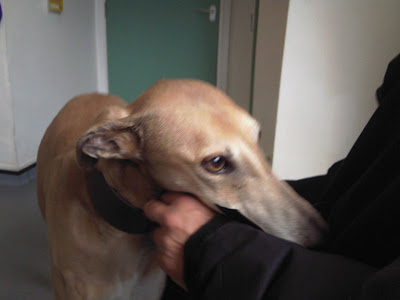 This didn’t work. The only animal to join in was a cat. “Roooooo!” I went. “Myaaaaaaaahhh” the cat angrily replied.

So I spun round on the spot attempting to attract more attention (the whole waiting room and my owners were all now looking at me but all they were doing was laughing - honestly, humans are stupid!) the only problem was I banged my foot on the chair in the process. It made me yelp, people started to pay more attention to me so I continued the yelp for what seemed like a lifetime. By now I was getting the sympathy and attention I rightly deserved, until I made one fatal mistake. I jumped up at my daddy who was by now hoping the ground would swallow him up, in doing so I put my weight on my fake “injured” foot. 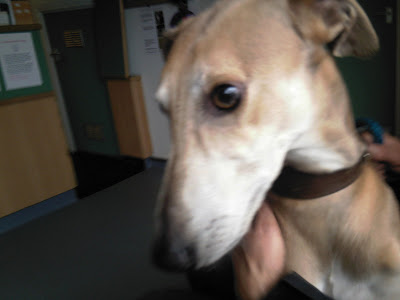 It was a rookie mistake, I admit, because they now knew I was faking it. But I'd at least made enough noise by this point to make the nice vet lady came out to take me in the other room that smelt all of other animals. 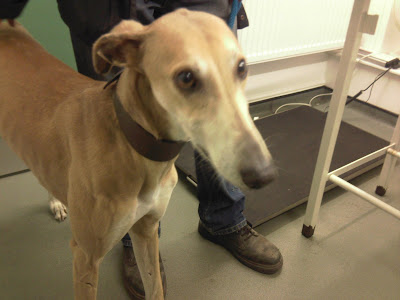 There were no other animals in the room. It was a trick! But she fussed me and touched me all over and came at me with what looked like a pull toy. I was quickly told it was no pull toy, but actually a stethoscope that was chilly on my chest. Then she stabbed me with needles! Oh, the pain!!!! But then she took me and put me on the scales and I forgot completely what I’d been yelping about.

I’m half a kilo over greyhound racing weight apparently. Which is fine as I’m not a professional athlete.

The vet lady then gave me some biscuits. I forgave her for the whole stabbing with needles thing and then me, mummy and daddy left.

I then spent the evening milking it, looking pained in order to get biscuits and lots of lovely milk from mummy and daddy. Maybe the vets waiting room isn't that bad after all!
Posted by Dudley at 5/15/2009

Dudley is an 8 (ish) year old Greyhound Saluki Lurcher. He spent the first months of his life in a shed, fighting other dogs for food. When he was found he was drastically underweight, covered in scars and had a seriously bad case of worms.

During his first day alone in his new home he opened the fridge, stole all the food and ruined the kitchen.

Six years on he now goes everywhere with his owners, he's the perfect weight and is spoiled rotten. This blog will show you the various adventures in the life of Dudley Doo the amazing singing Lurcher.

Dudley welcomes comments and is on the look out for any friends (he's also quite keen on finding a girlfriend!)