skip to main | skip to sidebar

Sorry for the lack of posts I've been busy reading up on rabbit-catching techniques. Mummy and Daddy have started taking me for walks around some nearby fields which are rife with rabbits. I love chasing them but I keep hearing words like "rubbish" every time I let them run away. I think I'm meant to do something with them other than just run at them until they run away.

Mummy has been watching Crufts on the TV which is apparently a show I can't enter because I'm not a pedigree. I don't know what that means but here is a picture of the dog that won. A Hungarian Vizsla. If that big shiny thing is the prize then it's really not worth it. I'd need at least 12 biscuits to prance about all fancy and let someone touch me like those judges do. 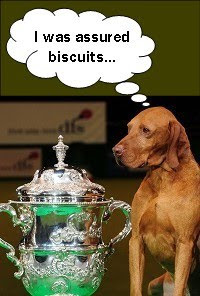 I did however notice a relative of mine, distant obviously, but we've still got a similar bone structure... 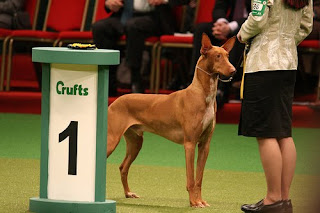 On Saturday Mummy and Daddy left me alone in the house, they came back just in time to hear my canine rendition of "Are You Lonesome Tonight?" they made lots of sympathetic noises and mentioned the word 'lonely.' A little later they mentioned the phrase 'Dudley must want a friend' so the next time they took me for a walk I ran 400yds to the nearest doggies and showed them actually I do have friends. They're still mumbling about 'friends' and have also mentioned the word 'puppy' I'm not sure what's going on but I have a feeling change may be in the air...
Posted by Dudley at 3/15/2010

Dudley is an 8 (ish) year old Greyhound Saluki Lurcher. He spent the first months of his life in a shed, fighting other dogs for food. When he was found he was drastically underweight, covered in scars and had a seriously bad case of worms.

During his first day alone in his new home he opened the fridge, stole all the food and ruined the kitchen.

Six years on he now goes everywhere with his owners, he's the perfect weight and is spoiled rotten. This blog will show you the various adventures in the life of Dudley Doo the amazing singing Lurcher.

Dudley welcomes comments and is on the look out for any friends (he's also quite keen on finding a girlfriend!)